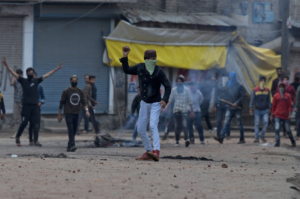 Today, at least 60 persons were injured, seven seriously, in protests during an Indian Army hunt to kill operation in the Kulgam district of Kashmir. Indian Army officials report they have pulled back in their use of pellet guns against unarmed protesters but that is not what protesters say nor what the injury rate would suggest. If not with pellet munitions, bullets, or tear gas canisters, then how were those 60 people injured today?

In January 2018, Amnesty International India launched a postcard campaign & online petition to ban the use of pellet guns by the Indian Army. Who knew? In a statement at the time, an Amnesty spokesperson said “The use of pellet shotguns is inherently inaccurate & indiscriminate.” They certainly are indiscriminate but exactly what did Amnesty mean by “inherently inaccurate”? Blindness accounts for about 70 percent of the pellet gun injuries & there is considerable other physical & mental damage, including from disfigurement & lifelong pain & suffering. What’s inaccurate about that?

Ending the use of pellet guns will take more than an episodic postcard & online petition drive. It is in the interests of all of us to campaign vigorously against pellet guns–which have also been used in Egypt & against Arab Spring protesters in Bahrain–to protect the right to protest without being assaulted & disabled. If India can get away with their use in Kashmir, it will be only a matter of time before pellet guns are used against protesters all over the world. We need to begin to figure out the political & organizational form such an international campaign should most effectively take.

After the killing of Zakir Musa last week, the NY Times published an article with the headline “Violent protests erupt in Kashmir after Indian forces kill militant.” The suggestion in the title is that protesters were out of control & violent when the reality is that unarmed protesters were expressing opposition to profligate violence against them in hunt to kill operations & by firing pellet guns & other lethal weapons at them. The violence is entirely one-sided & will end with the withdrawal of the last Indian occupation soldier from Kashmir.

India out of Kashmir. End the occupation. Self-determination for Kashmir.

Photo is protest in Srinagar last week against the killing of Zakir Musa.