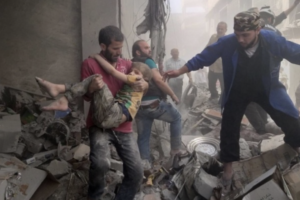 It’s so fascinating how Assad apologists who defend Syrian & Russian bombing of civilians & hospitals with cluster munitions, barrel & vacuum bombs go all squeamish when it comes to those two chlorine gas canisters dropped by Syrian bombers on Douma in 2018. It’s even more fascinating how those apologists for dictatorship morphed into ballistic forensic specialists. Ballistic forensics is some serious science requiring specialized knowledge of physics, biology, trigonometry, chemistry, metallurgy. Perhaps with their intuited scientific knowledge these savants & Assad apologists can explain the forensics of the other 336 chemical attacks by Syrian forces using chlorine gas (91.5%), sarin, & sulfur mustard gas on civilians. That information, by the way, didn’t come from the Assadist bêtes noires Bellingcat or the MSM but from the Berlin-based Global Public Policy Institute which found that 98 percent of chemical attacks were by the Assad regime on civilians. The other 2 percent were launched by the Islamic State.

It’s impossible to unravel the truth behind the OPCW report on Douma or what that leaked document by a dissenting OPCW engineer is all about. It’s impossible first because of the scientific knowledge required & second because it’s been through the hands of & misinterpreted by Assad propagandists with their claims to special intuited scientific knowledge. Does anyone with critical judgement really believe that Tariq Ali, Peter Hitchens, Jonathan Cook, Craig Murray, Robert Fisk, Max Blumenthal, Aaron Mate, Vanessa Beeley, Eva Bartlett, Caitlin Johnstone, Kevork Almassian, former Pentagon official Theodore Postol, or the crazy-pants at the World Socialist Web Site really have the scientific know-how to evaluate the forensics of those two canisters? But let’s give them those two chlorine canisters at Douma. Let’s go along with their pathetic, sorry-assed argument that the chlorine attack was staged by the White Helmets to discredit the Assad regime. What about the other 336 chemical attacks? Will they claim those were also staged by the White Helmets? What about the thousands of barrel bombs, cluster munitions, vacuum bombs dropped on civilians by Syrian & Russian bombers? Are they justified, as Assadists claim, in defending a dictator’s right to self-determination?

In truth, Assad apologists are making a federal case about those two chlorine canisters at Douma in 2018 to distract from the murderous Syrian & Russian bombing campaign in Idlib & Hama right now. Beeley & Bartlett continue to claim that the hundreds of thousands of civilians being bombed & displaced are terrorists operating in the region rather than civilians forcibly evacuated from other regions in Syria after “liberation” by the Syrian Army, Iran militias & Russian bombers & militias. Unfortunately, in Beeley & Bartlett’s flatulent trail are those like Tariq Ali & hundreds of other erstwhile socialists & progressives who bought into Muslim-hating ‘war on terror’ ideology & into the anti-Semitism that is so fundamental to Assadism.