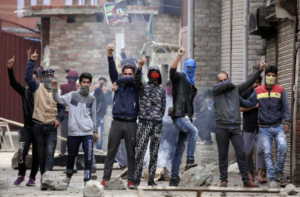 Fourteen-year-old Fazil Fayaz Malik is on life support in a Kashmiri hospital after being beaten in detention by Indian occupying forces. He was one of seven young boys arrested on Friday & held in an army camp near Soibugh village in the Budgam district for protesting the execution of Zakir Musa. They were allegedly detained for stone pelting which the Indian Army, exactly like the Israeli Army, is trying to turn into a capital offense.

Yesterday, protesters, including family members, protested the arrest & beating of young Fazil as well as another young boy who had been beaten in custody.

(Photo of Kashmiri protesters is Reuters file photo; it is not certain if it is from the current protests against the execution of Zakir Musa)