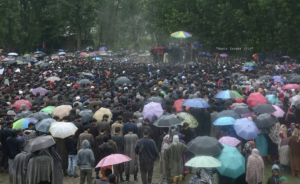 Kashmiris are grieving the death of Zakir Musa (Zakir Rashid Bhat), a deeply religious young man who was part of the armed resistance in Kashmir & who was executed yesterday in a gruesome 6-hour encounter with Indian troops. Today, thousands of Kashmiris came from all over the valley to pay final respects at his funeral prayers & they came despite heavy rains, a curfew, internet shutdown, & extra deployment of Indian troops. There were also protests against his execution all over Kashmir.

We do not have to agree with all of Zakir’s political ideas nor with the strategy of guerrilla warfare to honor his life & commitment to azadi, to freedom from occupation, & self-determination for Kashmiris who have a right to defend themselves by any means necessary. Musa’s execution is part of the brutal military campaign of hunt to kill operations being waged for the past few years targeting armed militants. But as we know from India’s use of pellet guns against unarmed protesters, from the arrest of hundreds of protesters, from the execution of relatives of militants, from the recent JKCCS & APDP report on torture, one does not have to be an armed militant to be brutalized & murdered by Indian occupying forces.

We stand with Kashmiris today in grieving the death of Zakir Musa & of all those who have given their lives to the struggle for freedom.
End the occupation of Kashmir! Self-determination for Kashmir!

(Photo is funeral of Zakir Musa today in Tral, Kashmir by Basit Zargar)