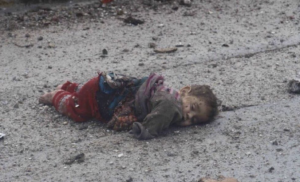 From the 2018 “liberation” of Eastern Ghouta by Syrian & Russian bombers, now being repeated in Idlib & Hama.

Portrait of Russian & Syrian ‘liberation’ of Eastern Ghouta by barrel bombs & chlorine: or as Assad’s corral of hired propagandists would put it, crisis actors forced to play dead & foam at the mouth on cue. As the corrupt antiwar & socialist movements would put it, this carnage of children is necessary to protect Assad’s right to national sovereignty against US regime-change. Meanwhile children die bereft in the public streets because somewhere in Syria, the principles of solidarity & opposition to war got bombed to smithereens when Stalinism allied with fascism.

The only principled demands are for the immediate cessation of bombing & the immediate, unconditional withdrawal of all foreign military forces from Syria.

(Photo is from Eastern Ghouta in mid-March 2018. Photographer not identified but in several Arab publications.)