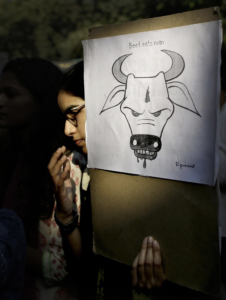 A 50-year-old Muslim man was shot & killed & another injured by Hindu cow vigilantes in the town of Bhaderwah located in the Jammu administrative division of Jammu & Kashmir state. Jammu has a Hindu majority population. Reports on the incident are contradictory. One report says the cow vigilantes accused the men of smuggling cows but the injured surviving man said they had horses, not cows. Another report says the family claim the murdered man was a victim of cow vigilantes but the vigilantes counterclaim that they opened fire after they found the two men ‘roaming under suspicious circumstances’. What police haven’t answered is why the vigilantes thought they had a right to start shooting unarmed people & exactly what ‘roaming under suspicious circumstances’ means. According to IndiaSpend, a data journalism website, almost all of the 63 attacks since 2010 involving cow-related violence were recorded after Modi & his Hindu nationalist government came to power in 2014. Forty-four Indians–39 of them Muslims–have been killed & 124 injured between 2010 & June 2018 in cow-related violence.

Hindus consider cows sacred based on the ethical principle of non-violence & belief in the unity of all life. Slaughtering or selling them or eating beef is illegal or restricted by law in 20 of the 29 Indian states. Kashmir has a ban on cow slaughter but it is widely sold in markets. No one mocks that Hindus hold cows as sacred. Because of the cow’s importance to human civilization, it is held sacred in many religious traditions. Though one can question why belief in the unity of all life does not extend to all animals like buffalo, goat, sheep, & birds, & more importantly, to Muslim & Dalit lives. In a democratic society, which India claims to be, why isn’t there tolerance for those who do not share Hindu ethical beliefs?

If the cow is considered sacred in India–even more so than Muslim or Dalit lives–one would think Hindutva nationalists would assure the highest standards of care for cows. Instead, the city of Lucknow in the state of Uttar Pradesh reports that 1,000 cows die extremely painful deaths every year due to plastic consumption. The chief veterinary officer said 20 to 25 cows are found dead on the streets every month from multiple organ failures caused by the clusters of rock solid plastic removed from their stomachs. (Lucknow has a plastic ban which is apparently not enforced.) Even if cows were not held sacred, this is an abomination.

Indian media is reporting that the family of the murdered man formed a mob that attacked the Bhaderwah police station, damaged five vehicles & set a three wheeler on fire. In response, the police used batons & tear gas on the protesters, imposed a curfew, snapped the internet, & deployed additional Indian troops. Two people have been arrested in connection with the attack & seven others detained for questioning. Protests continue because the murdered man is unlikely to see justice in an Indian court of law.

There have been protests against cow vigilanteism in India. In this Oct. 2, 2015 photo, a student activist holds a placard denouncing the killing of a 52-year-old Muslim farmer Mohammad Akhlaq by cow vigilantes in New Delhi.