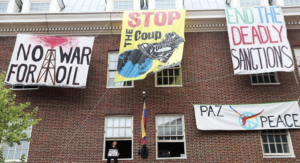 The purpose of occupying the Venezuelan Embassy in Washington, DC in defense of the Maduro government is not politically apparent since in January 2019 Maduro closed down the embassy, broke diplomatic ties with the US, & recalled all diplomatic staff from the embassy as well as from its seven consulates in the US. Trump cancelled the visas of all Venezuelan diplomats associated with the Maduro regime so they had long vacated the premises when Code Pink & others took up occupation in April, nearly two & a-half months later. Code Pink says they took up occupation at the invitation of the Maduro government but, again, for what political purpose?

In January, with hopes for a successful coup by Juan Guaidó, the US appointed Carlos Vecchio as Venezuelan ambassador to the US. Guaidó’s coup attempt has long since bit the dust & he is now in hiding somewhere in Venezuela. His frustrated supporters gathered outside the embassy in DC to support Vecchio taking over. Taking over what? A building? Because at this point, Guaidó taking over Venezuela is absolutely excluded. When asked the purpose of the occupation, Medea Benjamin from Code Pink explained, “We thought that if they took over this embassy then Maduro would take over the US embassy. The US embassy would call that an act of war & would invade. We’re trying to stop a war here.” Maduro ordered US diplomats out of Venezuela in January & has refused to issue visas for additional diplomats but has taken no action against the small remaining staff in the US embassy. So the question remains, exactly what is the political purpose of occupying an abandoned embassy?

It’s a symbolic action, a grandstanding action that primarily focuses attention on the Maduro government when what is needed in response to US threats & aggression is massive, public antiwar mobilizations around the world demanding the US stop interfering in Venezuelan politics & end its war threats. Venezuelan working people have a right to work out their differences with the Maduro government without also having to fight the US army. If the embassy occupation were part of an overall antiwar strategy focused on bringing tens of thousands into the streets, then it would make some sense. But as a substitute for such action, it makes almost no sense.

(Photo of Venezuelan embassy under occupation by Code Pink)