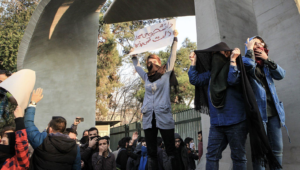 So many express admiration for Iran’s theocracy because it defies US sanctions. As if that defiance came from some higher purpose & not economic & political imperatives. What about it’s military intervention against the Syrian Arab Spring involving the slaughter of thousands of civilians? What about its repression in Iran of free speech; the arrest, torture, & rape of political prisoners; the killing, persecution, flogging, & jailing of journalists; freedom of religion; outlawing of homosexuality; mass trials of dissidents; compulsion to wear the veil? What about the annual conference it sponsors of fascists, holocaust deniers & other anti-Semites, 9/11 truthers & other conspiracy mongers? What about the sentence of human rights lawyer Nasrin Sotoudeh to 38 years & 148 lashes for speaking out against the compulsory veil for women? What about human rights?