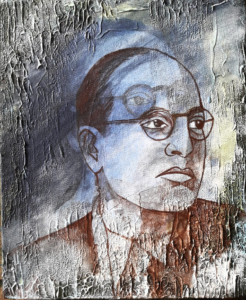 This is Rollie Mukherjee’s portrait of B.R. Ambedkar (14 April 1891 – 6 December 1956). He was an extraordinary figure in Indian history who should be known as well as Martin Luther King, Malcolm X, Sojourner Truth, Che Guevara, Maqbool Bhat, & others of such remarkable character.

He was born into the Dalit (untouchable) caste & went on to become a scholar, jurist, economist, politician, journalist, & social reformer. He campaigned for Indian independence from Britain, advocated political rights & social equality for Dalits & other oppressed castes, supported the rights of women & of labor. He was the architect of India’s constitution & a founding figure in the Republic of India.

Out of all his achievements, he will be most honored for the role he continues to play in inspiring the struggle of Dalits against caste oppression.