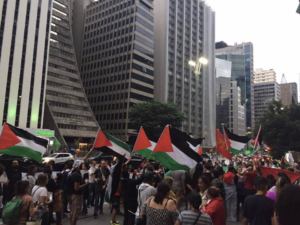 Brazilian far-right president Bolsonaro arrived today in Israel for a state visit with Netanyahu. Bolsonaro said they would be signing undefined “security” deals & for Brazil to do oil & gas exploration offshore Israel. Bolsonaro wanted to announce a move of the Brazilian embassy to Jerusalem but there is opposition within his government because some believe it would hurt Brazilian exports to Arab countries. According to one official, at stake is an estimated $5 billion in sales of halal food that comply with Muslim dietary laws. Perhaps those Brazilian officials could tell us which Arab countries have exhibited any real solidarity with Palestinians.

When Bolsonaro left Brazil for Israel yesterday, thousands of Brazilians were protesting in solidarity with Palestinian Land Day & with the one-year anniversary of the Great Return Marches in Gaza.
Photo is of protest yesterday in Brazil for Palestinians.