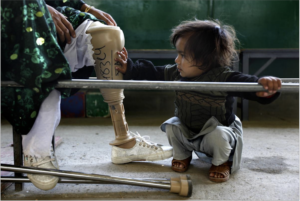 In December 2018 when Trump announced the withdrawal of 7,000 US troops from Afghanistan, he wasn’t announcing the end of the war although it was widely interpreted as such. There are still over 7,000 US troops & probably triple that in special forces, mercenaries, & CIA operatives, plus 8,473 troops from 38 other countries. The US Air Force, which remains in Afghanistan, reported that it dropped more bombs & other munitions in the country in the first ten months of 2018 than in any other year since the occupation began in 2001. From January through October 2018, US forces dropped 5,982 bombs out of the 6,600 sorties it flew. Casualties from airstrikes have increased every year since 2014. So although the US may be withdrawing some of its ground soldiers, it is escalating the barbarous air war against the Afghan people.

The intensified bombing, of course, has caused a record number of civilian casualties. According to data from the UN, there were 3,804 civilian deaths in 2018, including 927 children. Women & children together represented 38-percent of all civilian casualties. Yesterday it was reported that a US bombing near Kunduz killed 14 civilians, ten of whom were children. The US Pentagon is blaming their deaths on the Taliban saying, “The Taliban were hiding in civilian homes & maneuvered in & out of compounds without any concern for the families living inside.” What the Pentagon spokesperson is admitting is that the US bombed Afghan homes & villages knowing there were civilians present in order to pick off some Taliban fighters. That is called a war crime.

The international antiwar movement must be rebuilt to stand steadfast against the war on Afghanistan with the demand of ‘US out of Afghanistan’.

This photo is an Afghan girl touching her mother’s artificial leg which was lost in one of the thousands of landmine incidents.

(Photo from The Atlantic, November 2009. There is almost no photojournalism from Afghanistan since it is the most deadly country for journalists. What there is of photographic war coverage glorifies the US military.)