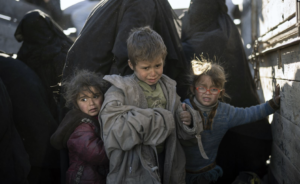 These children are among the estimated 10,000 fleeing US-coalition carpet bombing in the Baghouz district of Syria under the guise of destroying ISIS which controls the area. Much of media describes them as children of ISIS fighters but in fact most of their families have no association whatsoever with ISIS but lived forcibly under their control. Whoever their parents, children have absolutely no culpability for the politics of their parents & are victims of war.

Demand the immediate cessation of Syrian, Russian, & US-coalition bombing & the immediate, unconditional withdrawal of all foreign military forces from Syria.