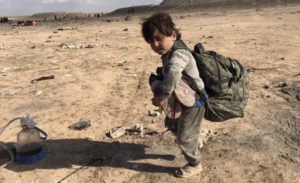 This Syrian child lost both his parents in US-coalition bombing in Baghouz under the guise of destroying ISIS. Still there are anti-Assad writers who call for ‘humanitarian intervention’ by the US to salvage the Syrian Arab Spring uprising. What do they not understand about counterrevolution in Syria, of which the US-coalition is fully a part? What do they not understand about US militarism & the so-called ‘war on terror’? If ISIS did not exist, the US would have to invent it to justify its barbarous wars.

The only principled demands are for the immediate cessation of Syrian, Russian, & US-coalition bombing & the immediate, unconditional withdrawal of all foreign military forces from Syria.