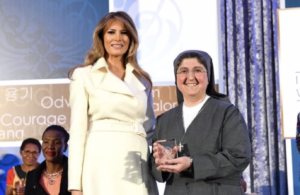 Here’s a piece of news that got past us which makes fools of those who claim the US in on a “regime change operation” in Syria & of those who call for US ‘humanitarian’ bombing in Syria to save the Syrian Arab Spring: this is Melania Trump with Sister Carolin Tahhan Fachakh, a Syrian nun who received the 2017 International Women of Courage award from the US State Department. The good sister with stinking rotten politics told reporters that she “likes” Assad because he’s very helpful & protective of Christians in Syria. She claims there is no truth to reports that Assad used Sarin gas on civilians just the week before she got the award. She didn’t admit that even if the reports were true, it would be no skin off her nose because he was only gassing “Wahhabi jihadi terrorists” who don’t accept the Vatican as their spiritual guide.

Can an Assadist or an anti-Assad war monger explain the good sister for us? These International Women of Courage awards from the US State Department are very like the Nobel Peace Prize: worthless.