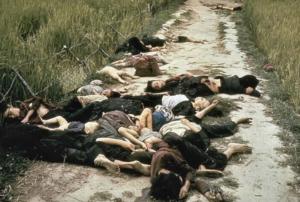 Today is the 51st anniversary of the My Lai massacre during the Vietnam War. It certainly wasn’t the first military massacre of civilians in US history, nor even the worst. Monstrosities on a colossal scale are the very nature of colonialism & war which characterize the last 500 years of human history, including the extermination of indigenous peoples in the Americas. What distinguished My Lai & made it a political turning point was the Vietnamese struggle against US military might & massive international opposition to US intervention. The Vietnamese anti-colonial struggle succeeded where others failed because it had a regular army combined with irregular forces experienced by 40 years of fighting French colonialism & because support for their struggle actively involved millions of people in every country.