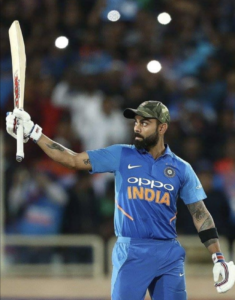 Mir Laieeq on how sports & culture are used to promote war & occupation—something we know all too well from Hollywood films, Netflix, & Israel.

“By wearing military caps in an international match, indian cricket team has a sent a message to the world that agressive military jingoism is now mainstream in india. It is also a reminder to Kashmiris that mainstream india is indeed complicit in every act of atrocity committed by indian armed forces in Kashmir. Such unreflective and uncritical support for armed forces, especially those involved in an ongoing brutal occupation, is always a sign of an impending disaster. There is no difference between lynch mobs who kill on streets and the supposedly educated professional cricketers and other celebrities, all are afflicted with insufferable jingoism, blind xenophobia and hypernationalism. This is high time for Boycott, Divestment and Sanctions movement against india. Being a nuclear power, india poses great threat to not only the peace in the region but also to the life on this planet (experts have argued that in case of a nuclear war in the region, 90% of world population will be affected). Sooner the world understands this, better it would be for all of us.”