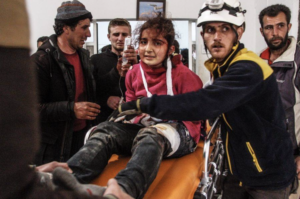 A wounded little girl or a ‘crisis actor’ as Assad propagandists claim? A rescue worker or a terrorist as Assad propagandists claim? It’s not irrelevant that advocates of a US border wall claim refugee children incarcerated in detention centers put on long faces for photojournalists, only feigning misery to worm their way out of being deported. The evidence of children is so compelling that they must be turned into propagandists & manipulators by those who defend barbarism.

Assad regime forces have intensified bombing & shelling, including with the use of cluster bombs, of civilians, towns, residential areas, & markets in Idlib & Hama provinces. Hundreds have been killed or injured. This White Helmet rescue worker is attending the injured at a field hospital though fascist Vanessa Beeley would claim on behalf of the Syrian & Russian governments that he is waiting for the camera to go away to remove her internal organs for trafficking.
The only principled demands are for the immediate cessation of bombing & the immediate, unconditional withdrawal of all foreign military forces from Syria.