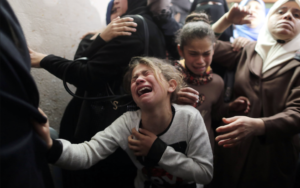 This young girl is a relative of 15-year-old Palestinian Yousif al-Dayyah who was killed by Israeli snipers at the Great Return March yesterday. These are mourners at his funeral in Gaza City.

A UN Human Rights Council commission of inquiry just ruled that “Israeli security forces killed & maimed Palestinian demonstrators who did not pose an imminent threat of death or serious injury to others when they were shot, nor were they directly participating in hostilities.” By their estimates, nearly 200 Palestinians, including children, journalists, & medical personnel, were killed by Israeli snipers in 2018 & over 6,100 were wounded, some of them sustaining permanent disabilities & dismemberment. The commission concluded that Israeli occupying forces “may have committed war crimes” & that it had “reasonable grounds to believe” that Israeli soldiers “committed violations of international human rights & humanitarian law”. Such tentative conclusions are the stock-in-trade of UN inquiries when the overwhelming evidence would lead to criminal indictments in any respectable court of law.

The Great Return Marches which have gone on for nearly one year are peaceful in nature, unarmed, & only demand Israel end the blockade of Gaza & the right of return to Palestinian refugees.

Stand with Palestinians by honoring & building the economic & cultural boycott of Israel for crimes against humanity, including genocide.