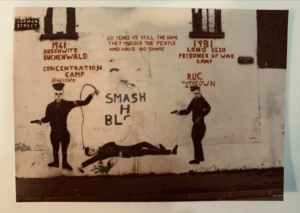 In 1983, I hitchhiked around Northern Ireland, then under occupation by the British Army. It was just after the hunger strike of political prisoners at Long Kesh Prison had ended. A little group of adolescent boys took me through the Catholic neighborhoods to show me the many political murals on the side of buildings in solidarity with the hunger strikers. This is one of them.