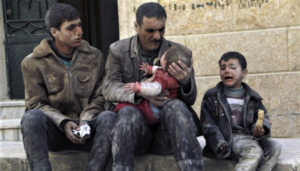 It is estimated there are at least 5-million Syrian refugees, 6.2 million Syrians, including 2.5 million children, who are displaced within Syria, & up to 560,000 Syrians who were killed by Syrian, Russian, Israeli, Turkish, & US-coalition bombing. Will the antiwar movement led by “retired” FBI, CIA, Pentagon & State Department officials please tell us again how this is a victory for democracy rather than the slaughter of a revolution?

(Photo from February 2014 is a man with an infant saved from rubble after a Syrian regime airstrike in Aleppo, by Hosam Katan/Reuters)