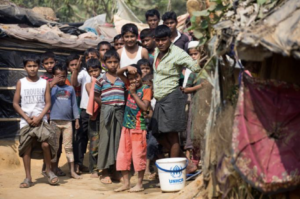 After the 2010 Haitian earthquake, over 10,000 NGOs, including Bill Clinton’s foundation, swarmed like locusts into Haiti raising millions of dollars for humanitarian aid without even port-au-potties to show for it one year later. The most appalling case of grand larceny was by the International Red Cross which has six houses to show for nearly half a billion dollars in donations.

Now there are reports by a watchdog organization that NGOs raising millions for humanitarian aid to Rohingya refugees are appropriating the money to spend on “luxury SUVs, five-star hotel rooms, & other amenities.” This is where that white savior crap comes in. There should be no monies raised for humanitarian aid without direct control by those who are affected. If the Rohingya are being used to raise money, they should be able to monitor & control how, to whom, & for what purpose those monies are dispersed. If Haitians had been able to control the millions raised by using them, they would have long-since ridden those NGOs out of Haiti on a rail.

Rohingya refugees do not need NGOs to ‘save’ them by stealing from them. They need political action & international solidarity demanding their human & democratic rights as refugees & as citizens of Burma.