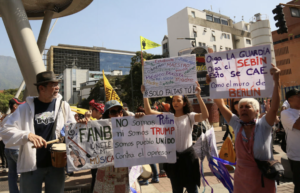 So let’s get this straight: the Trump regime–which kidnapped thousands of little kids from their parents & locked them up in warehouses; which hermetically sealed the US border against thousands of desperate refugees; which is bombing & starving out civilians in several countries; which has close personal & political relations with the head-chopping Saudi government; which bankrolls the genocide of Palestinians, didn’t lift a finger to stop the genocide of Rohingya, & sells military equipment to India to maintain the occupation of Kashmir–is sending humanitarian aid to Venezuela? It’s a provocation & could be called an act of war. Those who buy into it should talk to Trump about buying swampland in Florida right next to Mar-a-Lago. Those who buy into it to rah-rah for war against Venezuela stand on the side of tyranny & are no friends of the Venezuelan people.

This photo is a February 2nd protest against the Maduro government in Caracas. The placard reading “No solos Putin, ni solos Trump, somos pueblo unido contra el opresor” means “We are not Putin, nor are we Trump, we are people united against the oppressor.” To stand with Venezuelans does not mean whitewashing the political & economic policies of Maduro, blaming the austerity & repression all on US sanctions, calling the capitalist Venezuelan government socialist, or vilifying protesters–as Assadists, Stalinists, fascists did all the Arab Spring uprisings–as US-orchestrated. It means opposing US military intervention so Venezuelan working people can settle the score with their own government without foreign interference.

No US war against Venezuela!