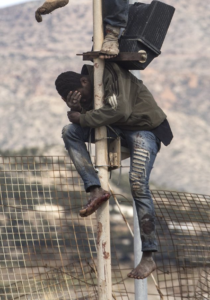 Initially after seeing this photo, I tried to write two posts about the refugee crises all over the world from Rohingya fleeing genocide in Burma to children being torn from their families & jailed in the US; from Syrian, Iraqi, & Afghan war refugees denied asylum to Sri Lankan, Syrian, Iraqi, Afghan refugees jailed in Australia. FB disappeared them both. That’s good because the photo of this young man from Sub-Saharan Africa speaks to those crises more powerfully than words ever could.

Open the damn borders. No human being is alien to us.
Haseeb Rahman’s original post on this photo:

“Colonialism raped Africa and this is just one result.”

A sub-Saharan Asylum seeker with bloodied feet cut from barbed wire dejectedly sits on a metallic fence that divides Morocco and the Spanish enclave of Melilla. After hours of waiting for Police dogs to disperse the man buried his head in his hands.

“All the borders in the world are man-made. There are no borders, we are all hooked together. Everything is connected. There is no line of demarcation. We are hooked together like the colors of a rainbow, our problem is ignorance, we don’t understand that.”