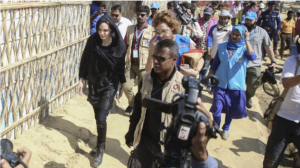 Angelina Jolie is spending three days at Rohingya refugee camps in Bangladesh as a special envoy for UNHCR, the UN refugee agency so remiss in its mission toward all refugees, including the Rohingya. So glad to see Maung Zarni call her out for playing a white savior role so patronizing & contemptible to the oppressed. Maung pointed out that while media makes a big deal of her occasional junkets of white messiah-ism, the extraordinary, unrelenting work of refugees & their advocacy organizations for refugee rights & an end of genocide is completely ignored. Too many, schooled in the gestalt of white supremacy, swoon over her grandstanding junkets. Mostly she serves to give cover for UNHCR’s negligence & earns herself a halo; the refugees’ fate isn’t altered an iota & refugees are treated as helpless & hopeless halfwits when they, with the help of their supporters, are the agency of their own emancipation from genocide.

(Photo of Jolie at Cox’s Bazar, Bangladesh from Sky News)