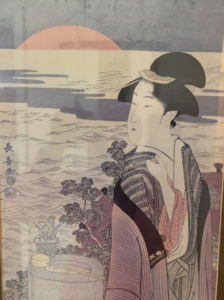 This portrait of a geisha from the Edo period in Japanese history (1603-1863) is part of an artistic genre that glorified prostitution & the commodification of women & young girls. This genre is politically akin to the glorified portraits of Native Americans in the late 19th century when they were already vanquished peoples forced to live on squalid reservations. US magnates like JP Morgan were building anthropology museums to warehouse artifacts of indigenous tribes who were being exterminated by the US Army before they ‘went extinct’. Morgan, et al, wanted photos taken to memorialize them & commissioned photographers to create a genre glorifying Native Americans even while they were being exterminated. The portraits of the Native Americans, like the portraits of geisha women, are as artistically stunning as they are historically dishonest.

This photo is from my extensive collection of Japanese art (reproductions, of course). I was introduced to Japanese art & culture when Hiroko Ray was my beloved roommate while we were both college students in San Francisco. I love the aesthetic of Japanese art & was not aware at first that the magnificent portraits of women were glorified images of geisha life. Through the art I learned something about Japanese history & came to understand more about the role of women. It’s an important history to learn about.