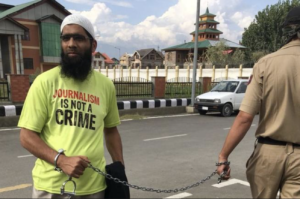 The Committee to Protect Journalists has sent an appeal to Jammu & Kashmir officials demanding the release of Kashmiri journalist Aasif Sultan who was arrested in August 2018. According to the appeal, police not only accused Sultan of sedition but objected to his FB posts.

(Photo is Sultan when he was being arrested)