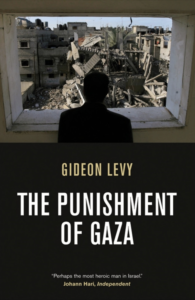 “The Punishment of Gaza,” published in 2010, is a collection of articles from Haaretz by Israeli journalist Gideon Levy. The articles cover the period between 2006 & 2009, although Levy began reporting from Gaza many years earlier. In August 2005, just a few months after the Second Intifada ended, Prime Minister Ariel Sharon dismantled all 21 Zionist settlements in Gaza, forcing 8,000 settlers to relocate within Israel. Israel continued to maintain direct control over Gaza’s borders, coastline & airspace but did not formally impose the full embargo until 2007. Gaza was still in every way an occupied territory & hardly the land of the free. There’s a long & complicated history to Israel’s so-called ‘disengagement’ from Gaza but it ended up making Gaza a prison & a military situation very much like shooting fish in a barrel. This book was published after the 2008-2009 Israeli bombing campaign & invasion of Gaza which Levy castigates mercilessly.

Levy is an impassioned journalist who evokes a very visceral response to his descriptions of the brutalities of the Israeli occupation. Already in 2009 he was pointing out that Israeli bombers particularly targeted Palestinian children–a fact that the UN & other human rights groups did not thoroughly investigate until after the 2012 & 2014 Israeli bombing campaigns over Gaza. Levy also cogently defends the boycott of Israel, launched by Palestinians in 2005, by showing how Israel effectively & violently uses the boycott tactic against Palestinians–most pervasively & monstrously through the embargo of Gaza.

The book is less than 150 pages & because of Levy’s journalistic style & political commitment reads very quickly. It is an excellent book for anyone wanting to understand Israeli apartheid policies & the affects of apartheid & genocide on Palestinians in Gaza. It’s a partisan book, fully committed to Palestinian justice.

(Photo is cover of “The Punishment of Gaza”)