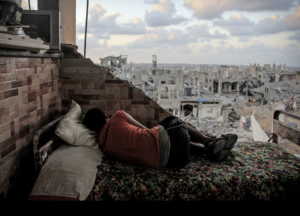 Censors removed this photo when Haseeb Rahman posted it to commemorate the seven-week Israeli bombing siege over Gaza in July through August 2014. It’s of a young boy sleeping in the rough with bombing rubble in the background. Thousands were injured & killed, & homes, hospitals, ambulances, refugee centers were targeted. The UN & other human rights groups except for Amnesty said that children were particularly targeted by Israeli bombers. Amnesty wrote a deplorable report blaming Hamas.
Doesn’t matter how much they try to censor the truth: we will continue to stand with Palestinians against apartheid, colonialism, genocide. Their’s is the side of justice.