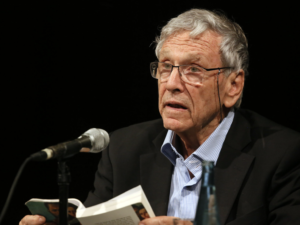 The journalism of Gideon Levy, one of the most uncompromising & penetrating Israeli critics of Zionism, is distinguished by a profound humanity toward Palestinians. There is no detachment but only a commitment to tell the truth about the brutalities of the occupation. Levy has long-since decisively broken with Zionism, supports a secular, democratic state for Jews & Palestinians, supports BDS “as the only game in town”, & offers excoriating critiques of the deceits & delusions of Israeli liberal Zionists, calling them collaborators & accomplices of the occupation. He is a towering figure in the struggle against Zionism. That’s why his eulogy for Amos Oz in Haaretz titled “The Prophet Amos Oz Was the Last of the Moral Zionists” is so surprising, if not altogether disappointing. Oz, who died last Friday at the age of 79, was Israel’s most renowned writer. Levy must have allowed grief at the death of a personal friend to overcome his good judgement in assessing the political character of Oz who was hardly a prophet & certainly not a moral Zionist. He was a good writer & may have been an affable friend but he was racist as hell toward Palestinians & exhibited none of the humanity so inherent to Levy.
There’s no question Oz was a good writer but the leitmotif of all his fiction & nonfiction works is justification for Zionism & the formation of Israel as a Jewish state which he posits as historical necessity for a people ‘faced with extinction’. Acknowledging that it was based on the forcible displacement of Palestinians was his little genuflection to historic reality but he repeatedly claimed with detestable nonchalance that Zionist bombers versus indigenous unarmed Palestinians was ‘a clash between right & right’.
Oz is a dishonest, manipulative ideologue who romanticizes Zionism & the “founding fathers & mothers” of Israel as visionaries. He calls Israel “a dream come true”, sweet-talking away colonialism, genocide, occupation, apartheid by saying Israel “could not live up to the supreme expectations of the founding fathers & mothers.” According to him, some of those founders–most of whom served in Zionist paramilitary terrorist groups–had a biblical vision, others a shtetl vision, others a socialist vision for what Israel should be. What he doesn’t say–& what Levy & other anti-Zionist Israelis have so profoundly elaborated–is that the core of Zionism is a belief in the superiority of Jews & the refusal to integrate or assimilate with others in pluralistic societies. That is the founding vision of Israel. The historic persecution of Jews is only used to seduce Jews into Zionist ideology, not to eliminate the persecution.
One of Oz’s constant themes is the contentious, argumentative nature of Israelis & Jews in general. He seems to take great pride in this & even glorifies it, calling them “a very Mediterranean people.” Hardly. Jews are no more asocial & uncooperative than any other ethnic or religious group & there is no such thing as what Oz calls “the Israeli soul.” The country is only 70 years old & if there is contention it is from trying to forge a unified culture out of the 136 different nationalities that make up Israeli settlers. It is from having a society based in colonialism, genocide, & militarism.
It would be so easy to claim that Oz had cognitive dissonance because he was a leading figure among Israeli Zionists who claimed to oppose the occupation. It would be more accurate to say he was a bullshit artist. He was a supporter of a two-state solution & every time he was asked about the possibility of one democratic state for Jews & Palestinians, he would first retreat behind metaphors about bedrooms, then move to anarchist rhetoric about preferring no state, & some times would admit he was afraid of a Palestinian majority. Fear of being outnumbered is the classic refuge of racists. How could he possibly claim to oppose the occupation when he championed the Israeli bombing sieges of Gaza in 2008-2009, 2012, & 2014? When asked about that, he again retreated behind personal metaphors–which is actually a classic evasion device used by rightwing ideologues. His constant use of metaphors to dodge the tough questions made him one hell of an artful dodger. In one of his more detestable metaphors justifying the carpet bombing of Gaza in 2014, he actually said Palestinians in Gaza sat their children on their laps as they lobbed mortars at Israel. How contemptible can you get claiming like Golda Meir & Netanyahu that Palestinians used their children as human shields? What kind of prophet does that? How damn moral is it to make such racist imputations against Palestinians?
Oz of course rejected the apartheid designation for Israel & opposed BDS, saying it was “childish”, “counterproductive”, & increased paranoia among Israelis. But what about the Palestinians? How else can an unarmed people oppose military occupation & genocide? In denying that Israel was like South Africa, he once again pulled the trite metaphor thing with some non sequitur about medicines for cholera & the plague. He also said that anti-Zionism became anti-Semitism if it challenged the existence of Israel. There was nothing moral about Amos Oz. He was willing to justify anything Israel did to accomplish his dystopic, racist vision of a Jewish-only state. May he Rest In Peace. Maybe he was a great writer. But what he wrote was soured by racism. What’s more important is the thousands of Palestinians unable to realize their dreams, including as writers, artists, musicians, because they are fighting for their very existence against the genocidal state of Israel.
(Photo by Amos Oz from Getty Images)