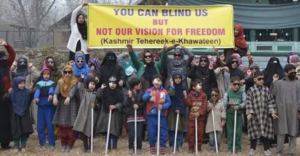 This remarkable & defiant photo is from the period near the end of the 2016 uprising in Kashmir when the Indian army was berserk with violence, especially in the use of pellet guns against unarmed protesters.

After nearly six months of a brutal military siege, 7,330 Kashmiri protesters have been injured, disfigured, & permanently afflicted by pellet munitions, including 1,562 youth partially or fully blinded. Over 15,000 people have been injured overall, including from tear gas, grenades, & live ammo.
We can see here how all that violence has brought their defiance & commitment to freedom to its knees.