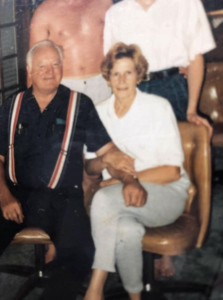 My 89-year-old aunt Rosemary Vail (who we called Midge) has died & I would like to honor her life. She was my mother’s sister, the youngest child in a family of nine. Both parents were German though Midge & my mother believed for several reasons that my grandfather Frank Urman had Jewish ancestry. Frank was an electrician & a union man who went to work for the state & had a job during the great depression; my grandmother Rosemary was a farm girl from Wisconsin–one of the thousands of young girls in that Sister Carrie generation who moved to cities to work & find husbands. She met my grandfather in St. Paul, Minnesota.
Midge met her husband Wayne Vail in church while visiting my mother & a friend in the small town of Hugo where we lived just outside St. Paul. Wayne, like most residents of Hugo, was of French & Native American ancestry. His parents got the first TV in town in 1948 & because they were so kid-friendly opened their house everyday at four pm so all the town kids could come & watch Howdy Doody. That kid-friendly thing was part of Wayne’s nature.
Midge, like my mother, was a deeply religious Catholic & she & Wayne, who was a plumber, went on to have 14 children of their own. I was the flower girl in their wedding, was doted over by Midge when I was nearly run over by a car, spent a lot of time, especially in the summers, babysitting for them where they lived in St. Paul, & simply fell in love with both her & Wayne & with their children who are more like siblings to the Scully clan than cousins. Lizbeth, who was my godchild, died from sudden infant death syndrome. They were as good to me & my siblings as to their own children. They both had a wonderful sense of humor & laughed a lot–as their kids still do. Midge sang to her kids & doted on them all. Both of them were stylish & good-looking in a movie star way but neither hung their identities on that. When I would go to church or the market with either of them, I would be so proud to be with them since they were not the least bit vain or snooty but instead warm & kind to everyone. Coming out of the McCarthy witch hunt era, both were extremely conservative politically.
What I & probably most others loved best about Midge was her kindness & interest in people. I was fascinated as a young girl watching her swoop down on a stranger to learn about them, not in a nosy intrusive way but with sincere interest & attention. She was always very good to me despite the tensions I had with my own mom over politics & treated me with sincere affection even when my politics diverged from her quite conservative views.
My sincere condolences to the 13 surviving Vail children, 44 grandchildren, & 50 great-grandchildren for their loss which their Scully cousins share. We loved our aunt Midge. She was a wonderful woman & we are blessed she & Wayne were part of our lives. Wayne died in January 2016. May they both Rest In Peace. <3
(The picture is Midge & Wayne when they were in their sixties.)