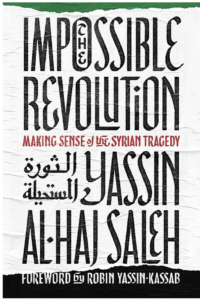 “The Impossible Revolution: Making Sense of the Syrian Tragedy” by Yassin Al-Haj Saleh is a brilliant book well worth–even essential–reading. The author is a Syrian political analyst & writer, now in exile, who served 16 years in a Syrian jail & whose wife & political associates were disappeared. The ten essays that make up the book are articles from 2011 & 2012 written for Al-Hayat newspaper. Al-Hayat is an Arabic newspaper which at that time came out of London but is widely read throughout the Middle East. It is not particular to Syria. Perhaps the greatest weakness of the book reflects the intended audience which is mostly intellectuals (who may or may not be activists) & less so the revolutionary movement of Syria.
Some of the essays are simply indispensable for understanding the Syrian Arab Spring uprising which became a revolution–in particular, his profound analyses of the shabiha (Assadist thugs), the militarization of the revolution, the development of terrorist militias, the political character of the Assad regime, the political character of “sectarianism” between Shia, Sunni, Alawites. So much attention has been paid in polemics to the political bankruptcy of the left outside Syria in supporting the Assad regime but in this book we get a sense of the weakness of the Syrian left as a result of political repression under the Assad dynasty & as part of the general political decline of the international left. One could argue that the weakness of political leadership in Syria makes the achievements & tenacity of the revolution all the more remarkable–or it might better be said that given the decline of the left, their absence actually made the achievements possible.
Because the articles chosen (out of the hundreds written by the author) were from the early days of the uprising, there is no analysis of the entry of Russia, Iran, Hezbollah, Turkey, Israel, & US-coalition forces which changed the character of the struggle to the disadvantage of the revolution. There is nothing about the plight of Palestinian refugees or the role of Kurds. A weakness of the book is that it does not situate the Syrian uprising within the context of the Arab Spring uprisings in Egypt, Yemen, Bahrain, Tunisia, & elsewhere. Many questions are left unanswered. But those issues that are addressed are brilliantly probed in a way not found elsewhere at least by non-Arabic speaking readers. The book is simply a must for those who wish to understand the Syrian revolution.