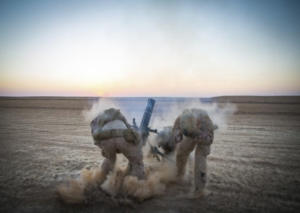 The US has spent nearly $6 trillion on wars that killed at least 507,000 people in Iraq, Afghanistan, & Pakistan since the 9/11 attacks of 2001. That does not include indirect deaths caused by bombing such as loss of food, water, health facilities, electricity. Nor does it include fatalities for Syria, Yemen, Libya, or US support for Israeli bombing & occupation of Palestinians. Since the Pentagon does not make an accounting of civilian deaths in any of its wars–it’s hard to do so when war planes are dropping thousands of bombs indiscriminately & quite frankly, the Pentagon doesn’t give a damn–these figures are approximations & are considered quite conservative. Of course, there is also no honest accounting of US soldiers killed.

Shall we talk about humanitarian US interventions now?

Photo is US Marines at an undisclosed location in Syria on September 10th.