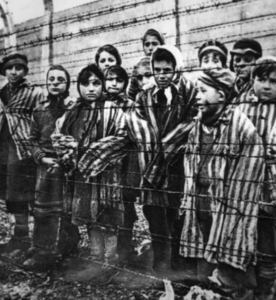 Last night, I watched a movie about the Jewish holocaust. It was a love story in the time of genocide & not a very good movie but it gave a small glimpse into the horrors of the holocaust. Denouncing the treacheries of Zionism can lead one to being callous about the pogroms & persecution of Jews & the holocaust & that is a very serious mistake. I’m reposting this from April 2014, just a few months before the seven-week Israeli bombing assault on Gaza. Zionism & Israeli apartheid & genocide cannot be justified by the holocaust. But we always need to sharply distinguish Zionism from the hatred of Jews which has led to such monstrous savagery. Based in supremacy, Zionism tries to separate Jews from the rest of humanity. We honor them as our own, as brothers & sisters in the struggle for a world free of such violence & hatred.
*************
Zionism & its supporters have controlled the history of the holocaust under the Third Reich of Hitler & the Nazi party. They have done so in a way to maximize guilt & mystify the political & economic causes for such unspeakable horrors against millions of Jews.

Most importantly in their distortions, they have separated the holocaust of Jews from that of Roma, the disabled, & millions of others exterminated by the Nazi regime & in a grotesque & racist caricature of history, they proclaim over & over again that the Jewish holocaust was the worst genocide in all of human history. Millions of Native Americans throughout the western hemisphere, millions of Africans caught in the Atlantic slave trade, millions of Pacific Islanders & Asians caught in the tentacles of imperialism & colonialism going back centuries are simply brushed aside in the Zionist distortion of history.

Many Zionists are making quite a living out of what Norman Finkelstein calls “shoah business.” But the main purpose of this historic deceit & guilt-baiting is to justify forcibly wresting Palestinan lands, violently terrorizing millions into exile, & making Israel an exception to all of the achievements of civilized society.

Nevertheless, six million Jews did perish in monstrous ways. While Zionism is a contemptible ideology, those six million people are not responsible for that. The holocaust is a monumental human tragedy that should be commemorated–not based on a false history but on a recognition that they were our own & that “an injury to one is an injury to all” of humanity. That is not a trite sentiment because it requires a commitment to come to grips with the true causes of the holocaust in order to honor those who died.

Israel is not a solution to pogroms & holocausts; it is Zionism reproducing in Israel the political matrix & methods of the Third Reich.

We should stop a moment or more to remember the six million Jews, the Roma, the disabled, & the millions exterminated by imperialism & colonialism since its ignominious inception. We should bow our heads to their memory & commit ourselves to creating a world where such savagery cannot exist.

(Photo of Jewish children in concentration camp by unidentified photographer)