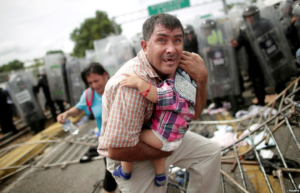 Newsy is reporting dissension among members of the Central American refugee caravan. Of course there is. What’s the big deal? The refugees are under tremendous pressure, including from the Mexican government. They’re exhausted & scared & worried for their kids since Trump has amassed 15,000 troops on the border threatening to shoot them. The problem of dissension isn’t just some kind of national conflict between Hondurans, Guatemalans, & El Salvadorans, as Newsy reported, but because it’s an ad hoc formation being threatened by the US, thwarted by Mexico, & only helped by Mexican working people who are themselves under military occupation by the Mexican army & drug cartels. A lot of any dissension will evaporate if they are offered busses to carry them north, encampments to protect them when they reach the border, & protesters to stand with them demanding ‘Open the damn borders. Immigration is a human right.’

Photo is a Honduran man protecting his child against Mexican soldiers trying to prevent them from crossing into Mexico, Oct. 19, 2018.