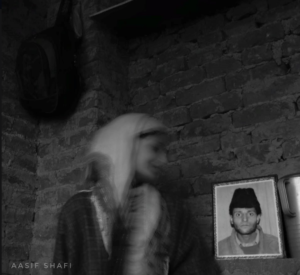 This is Children’s Day in Kashmir. Activists are marking it by focusing on the toll that forcible disappearances, extra-judicial killings, hunt to kill operations, a garrisoned state have on little kids—many of whom are orphaned or who suffer lifelong trauma like PTSD. Many are themselves blinded, disfigured, disabled from pellet guns. Stand with the children of Kashmir & let the world know what is happening as part of building a worldwide movement demanding “Go back, India, go back.”

“I am unable to recognize him even in my dreams, I was just 6 months old when he was abducted by an unknown gunman. Still I am waiting for him, He will come & hug me. Dear ‘Papa,’ nobody loves me, nobody cares for us, We are alone, Mumma is sick, I promise I will never demand for good food & good clothes. I just need your care.”

Shazia’s father Syed Anwar is missing from 2002, He was an auto driver by profession at Srinagar. Abducted by unknown persons, still his abduction is a mystery. Syed Anwar was one among 8,000 people who are missing since the insurgency began & they believe most have been taken by Indian government forces & never returned. Since 1989, Kashmir has been a state under siege, with both India & Pakistan laying claim to it.