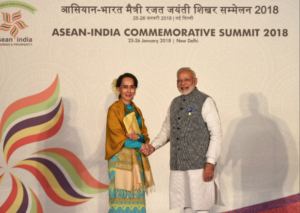 The Association of Southeast Asian Nations (ASEAN) summit will be held from tomorrow through Thursday hosted by Lee Hsien Loong, the dictatorial prime minister of Singapore. It is absolutely excluded that the Rohingya genocide will be addressed in any meaningful way because ASEAN is a free trade/sweatshop economics & military alliance between ten repressive regimes in Southeast Asia, including Burma, the Philippines, Thailand, Vietnam, Cambodia, Indonesia, Brunei, Laos, Malaysia, Singapore. Other countries involved with ASEAN include China, Japan, South Korea, Australia, India, New Zealand, Russia, Canada, Chile, & the US. Genocide in Burma will not come up because vigilante death squads in the Philippines, military repression in Thailand, political repression in Vietnam & other nations will not come up. Human rights are decidedly not the purpose of these summits.

ASEAN adopted a human rights declaration in 2012 (AICHR) which Burma signed while engaged in a genocidal onslaught against the Rohingya people & while the army was accused of using child soldiers & engaging in mass rape & scorched earth methods against other ethnic groups. The declaration is nothing more than window-dressing signifying nothing to the member countries in terms of child labor, human trafficking, drug trafficking, militarism, death squads, occupation, democratic rights to dissent, political corruption, extrajudicial killings, forcible disappearances, rape as a weapon of war & occupation, refugee rights, religious freedom, genocide. Duterte hosted the 2017 ASEAN summit while he was engaged in a death squad war against the urban poor & a military offensive against Moro Muslims.

This year Suu Kyi, Modi, Putin, Pence, Chinese premier Li, Chilean president Pinera, Duterte will be among the honored guests despite the Rohingya genocide, Indian occupation of Kashmir, Russian bombing of Syria, Chinese & Russian arming of the Rohingya genocide, Chinese genocide of Uyghurs, several US wars, Chile’s genocide against indigenous tribes, & Duterte’s ongoing vigilante war against the urban poor. The biggest issues at the summit will be countering Chinese aggression in the South China Sea & not letting the little matter of war, occupation, or genocide come between trade & sweatshop relationships. ASEAN is an institution of oppression, not an agency for liberation. It is to facilitate investments in a time of capitalist crises, not mitigate monstrous human rights crimes against the working poor.