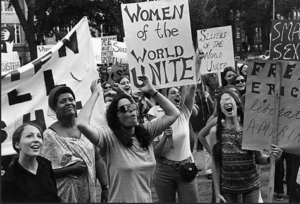 There is an avalanche of articles vilifying & denouncing white women for supporting Brett Kavanaugh & for voting Republican in the recent US elections. The hysteria–so reminiscent of media campaigns against Second Wave feminists–is coming from establishment media, including the NY Times, Washington Post, Guardian, Time, Vogue, Huntington Post, New Yorker, Globe & Mail, Washington Times, & includes an open letter from feminist Eve Ensler chiding white women for supporting Kavanaugh. Taking their cues from these articles without apparently doing their own investigations, many bloggers are also going after white women for voting white supremacy & privilege over gender oppression.

Most of the statistics these articles throw around in the most obfuscating way are based on exit polls. Doesn’t anybody do their homework anymore? Exit polls are highly controversial in methodology, manipulated tendentiously by the polling agencies (which are beholden to one of the two major parties), & notoriously inaccurate regarding the demographics of voters. Given the tendentiousness of polling agencies & the corruption & anarchic nature of US elections, it is impossible to tell the gender or ethnicity of the voters who decided these election results based on exit polls. It takes the Census Bureau months to come up with a more scientific analysis of the demographics.

The so-called gender gap has been an issue in US elections at least since the emergence of the women’s movement in the 1960-1970s. What statistics repeatedly show is that going back a few decades of elections, Black, Latino, Asian, & white women voters outnumber their male counterparts by several million & white women voters are close to three times the number of Black, Latino, & Asian women voters combined. What does one make of those statistics? Who the hell knows without a closer examination of who these women are? Election demographics are not destiny since there are still millions of women (& men) who don’t even bother to register or vote because they reject ‘all of the above’ with contempt.

But we don’t have to wait months for the Census Bureau. We don’t have to be a statistician or a supporter of either party to be impressed that women voters, women campaign volunteers & women candidates turned out for this election in unprecedented numbers. Record numbers of women were elected, including Black, Latino, & Native American women who took seats away from men. According to Brian Schaffner, an academic analyst of election results, these results were a repudiation of Trump’s misogyny & of Republican politics, including the Kavanaugh appointment. So how does that accord with the accusations that white women are the brake on social progress in this country?

This campaign against white women does not reflect the realities of racism & sexism in US politics but is an orchestrated campaign to divide Black, Latino, Asian, & Native American women from white women as archenemies, as nemeses in the struggle against women’s oppression. It’s the pernicious divide & conquer stuff that we are all too familiar with & it is regrettable, nay deplorable, that so many continue to fall for it. Of course racism is a problem among white women in the US. Not a single concession or compromise should be made with that reality. But this vilifying of white women is no part of any compromise & is intended solely to put women at odds with one another rather than unite in a common struggle against the oppression of women.

All this political treachery began in the 1960s with media misrepresentations of Second Wave feminism as white & middle class, ignoring that many of that generation came out of the civil rights movement inspired by the role Black women played; that Black & Latino women were a large, active part of the women’s movement; & that one of the central political demands was for abortion rights & against forced sterilization because eugenics was/is a fundamental issue for Black, Latino, Asian, & Native American women.

Photo is August 26, 1970 women’s march in Washington, DC; it was the first national public mobilization of Second Wave feminism with protests held around the country.