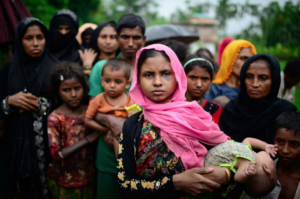 The Burmese genocidaires & Bangladesh, with the help of China (which armed the genocide) & India (which supported the genocide & is forcibly deporting Rohingya refugees), are accelerating the forcible deportation of Rohingya refugees in Bangladesh back to the killing fields of Burma. The most significant aspect of this monstrous plan is that representatives of the Rohingya people are not party to these negotiations. Deportation plans between Burma & Bangladesh actually began in November 2017 whilst the Rohingya genocide was in full throttle & thousands were fleeing for their lives. From then till now the plan has not gained an ounce of legitimacy or sanity. The Rohingyas are not cattle or sheep to be herded back & forth from killing field to squalid refugee camp at the whim of the oppressors. They have raised their voices in protest demanding they not be returned without substantial, ironclad assurances that they will not live in the concentration camps Burma has set up with help from China & India & that they will have full civil, democratic, & human rights.

Burma & Bangladesh call the forcible deportation plan a voluntary repatriation. But like the terms “crossfire” in Kashmir or “collateral damage” by the US Pentagon, they are just playing with words. Officials formulated a list of nearly 500 Rohingya families to be deported starting mid-November. Is there a single volunteer on that list? No, it was formulated entirely by Burmese & Bangladeshi authorities & it is almost certain that if the members of those 500 families were questioned, they would be outraged at their inclusion & terrified at being sent back to concentration camps & almost certain arrest, torture, death. It provides another chance for Burma to complete the “final solution.”

Does anyone in their right minds think Rohingya refugees should be sent back without their consent & without protections when they are still recovering from mass rape, mass executions, torture, the torching of entire villages, the loss of so many of their loved ones? Does anyone think barbarities of such a scale are psychologically overcome in just a matter of months whilst living in squalid refugee camps?

The Burmese generals, Suu Kyi, Sheikh Hasina, Xi, & Modi are the last people in the world the Rohingyas would trust with their destinies. There can be no decisions made about where they live without their direct participation in decision-making. If we do not raise our voices to support the Rohingya people, Burma & Bangladesh will get away with this continuation of genocide by other means. That we cannot allow.