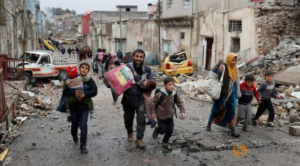 Anti-Assadists clamoring for US humanitarian bombing in Syria claim it’s necessary because the Assad regime is genocidal. So is the US. Just ask the people of Vietnam, Iraq, Yemen, Afghanistan, Palestine, the prisoners at Abu Ghraib & Guantanamo, & for that matter, people in the US Black, Latino, & Native American communities. And that’s just the short list. This is a photo of Iraqis fleeing US bombing of Mosul earlier this year. The stories of that several month siege & the aftermath of bodies rotting in the streets are too horrific to describe.

Syria & the US don’t stand alone condemned as genocidal. So are Burma, India, Israel, China, & several European countries. You don’t hear the Rohingyas, Uyghurs, Kashmiris, Dalits clamoring for the US Pentagon to come in with its bombers to save them because that isn’t how they see the US or their freedom struggles against tyranny. They understand the struggle for human freedom in very different terms–in terms that involve their own participation without relying on the bombers of a genocidal nation.

When you align yourself with the US Pentagon on the stage of world history today, you align yourself with one of the most reactionary, destructive military & political forces in the world & you betray solidarity with the people of Vietnam, Iraq, Yemen, Afghanistan, Palestine, the prisoners at Abu Ghraib & Guantanamo, & the Black, Latino, Native American communities.