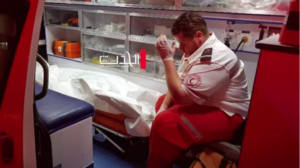 This is a member of an ambulance crew in Gaza crying over the recent deaths of several Palestinian children by snipers & bombers. Medical personnel are unsung heroes in war, occupation, & genocide. Though against international law, it is routine that the US, Russia, Syria, Israel, India target medical personnel, including firing on or bombing ambulances & medical facilities. When pellet gun victims in Kashmir or Israeli sniper victims in Gaza are brought to hospital, it is these medical practitioners who must deal in trauma care as on a battlefield. The PTSD levels among them must be sky-high. Many have themselves been killed.

We should take a moment to honor these men & women & note that they are also on the front lines of the Great Return March in Gaza & frequently protest against pellet munitions, against the occupation, & in solidarity with other freedom struggles in Kashmir.