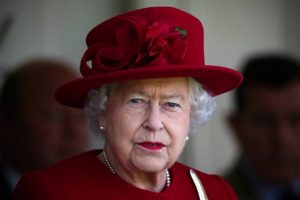 There’s so much tragedy in the world that it’s been awhile since I’ve posted about our girl Betty Windsor though she’s been a regular whirlwind of weddings, funerals, & the usual trifectas at the horse track. I even had to forego assessing her annual Christmas address which is always a masterpiece of banalities & non sequiturs. As busy as she is, life is pretty much the same for Betty–as it has been for every worthless moochocrat for the past over one-thousand years: hitting the horse track with Camilla, waving at parades while maintaining that poker face like she has a pole stuck up her butt, & trying to keep Phil, her “anus horribilis,” alive. In lieu of an update, I repost this, knowing that every word of it is still true.

Today, after 63 years on the throne, Betty Windsor becomes the longest-reigning monarch in English history. She chose to celebrate in a low-key way because the Diamond Jubilee extravaganza in 2012 required the closing of so many schools & hospitals she feared a similar event would cause a popular revolution & spell the end of moochocracy. She also had a trifecta riding on some horses today so she had to put first things first.

English media reports that Betty is Britain’s most popular monarch though how they would know that is a mystery. More popular than Henry VIII or Richard III? A lot of them were criminally insane & mass murderers so the honorific may not mean much. Perhaps it’s because monarchs are no longer allowed to cut people’s heads off in a snit.

Betty has seen a dozen prime ministers come & go–one more worthless than the next–& she got along well with all of them as long as they kept cutting the welfare checks.

Despite a life of indolence married for 70 years to her “anus horribilis,” Betty knows fluent French–though not as fluently as she knows a racing form. Horses are her passion, which probably explains her choice of husband. Over the years she’s received many gifts of exotic animals like jaguars, black beavers, & sloths. It was the latter she shared most affinity with. They were so much like her children.

Her life has been an emotional roller-coaster–from finding out her kids were as worthless as her husband & reckless, even flamboyant in their indiscretions, to grief when her royal yacht Britannia was scrapped in 1997.

She is notoriously cheap & this manifested first at her coronation in 1953 when she served her foreign guests sandwiches filled with rubber chicken mixed with raisins & mayo. Many criticize her for that but it was the prototype recipe for rubber chicken & made vegans of the guests.

Many compare her to her great-great-grandmother Victoria & one can understand why she takes exception to that. Victoria was a notoriously reclusive & prudish person whose name was given to those unpleasant souls with a pole stuck up their butts. The greatest likeness is in countenance since both appear to need prunes as a dietary supplement.

Betty is patron of more than 620 charities. There’s no largesse involved. It just means she goes hand-waving for them every once in a while.

Photo is Betty at one of her hand-waving gigs in Scotland where many have called fraud over the recent elections sticking with the Commonwealth.