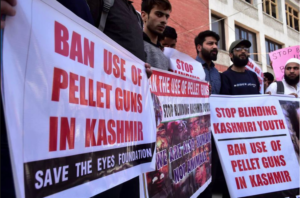 The barbaric use of pellet guns against Kashmiri protesters has been somewhat overshadowed by the Indian army’s constant murderous hunt to kill operations & the razing to the ground of family homes within the cordons of the operations. It is not an issue we can allow to shade out of public awareness if for no other reason than enlightened self-interest. If we don’t join Kashmiris in the demand to ban their use in Kashmir, we will be battling them on the streets of London, Tokyo, Berlin, & elsewhere.

This post from May 2nd of this year is by Peer Viqar Ul Aslam who pointed out that pellet munitions are a deliberate attempt to disable Kashmiri youth to deter others from taking part in the struggle against occupation. Not unlike how Israeli snipers shoot Palestinian protesters in the legs or kill them outright. Disability rights has become central to the struggles against occupation & for self-determination.