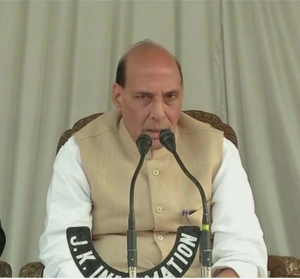 Referring to the massacre at Kulgam, Kashmir last Sunday, Rajnath Singh, the Home Minister of India, said: “Kulgam incident is unfortunate, people lost their lives in a blast, heartfelt condolences to the families, we will give 5 lakh rupees compensation to each family.” So expressive of contempt & indifference, that would be called adding insult to injury writ large.

He also tweeted today: “Jammu & Kashmir could not become a developed state due to corruption at several levels. The state government has chalked out an ‘Action Plan’ to take strong action against corruption. It will soon announce certain measures to curb corruption in J&K.” That action plan probably involves the deployment of more troops & more aggressive & frequent hunt to kill operations.

End the occupation. Self-determination for Kashmir. Support Kashmiris in getting rid of these amoral oppressors.