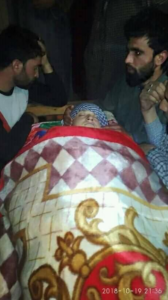 This young woman named Firdousa is a civilian who was gunned down today by Indian occupying forces in the Pulwama district of Kashmir. She was the wife of Khursheed Ahmad Sheikh &, according to the doctor who declared her dead, she was six-months pregnant. The details of how she was killed are sketchy; news reports say only that she was killed in crossfire between militants who fired a grenade at an army camp & the Indian occupying army defending itself. Yeah right! The chances of this scenario having much to do with reality are slim–especially when we consider that the majority of those injured & killed in Indian army operations are civilians & not armed militants. These so-called stray bullets & cross firings are euphemisms for targeting civilians with the purpose of destroying resistance to occupation & colonialism.

Our condolences to the family & friends of Firdousa & to all Kashmiris. May she Rest In Peace.

Stand with the Kashmiri freedom struggle. Demand the end of occupation & self-determination for Kashmir.