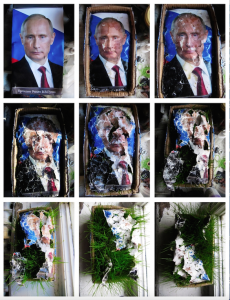 This time-exposure photo collage of Putin sarcastically titled “Nine stages of the leader’s decomposition” was done by a Russian artist who photographed Putin’s image placed on a seed bed decay progressively . A Russian court ordered the seditious collage destroyed. So much for democracy in Russia. And still so many who call themselves progressives and revolutionaries champion Russia & Putin as champions of modern democracy. Just like they did Stalin. Stalinism isn’t a historic betrayal & failure; it is an enduring political method by those who believe social change is forcibly & autocratically imposed on people whether they like it or not. As in Russia, so in Syria & elsewhere. Stalinism is finding its final resting place within fascism & some of the advance guard call themselves Trotskyists. How sarcastic can history get?