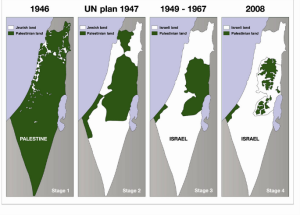 Standing with Jeremy Corbyn against the scurrilous campaign by Zionists to portray him as anti-Semitic does not mean we have to stand dumb as a stump on his reactionary political views. It’s naive & injudicious, if not outright stupid, to treat political leaders like demigods. It’s ironic that his support for Palestinians set off the Zionists when he holds a quite conservative support for a two-state/bantustate solution to Israeli colonialism, apartheid, occupation, & genocide.

Addressing the 2018 Labour Friends of Palestine conference, he said a Labour government would recognize an independent state of Palestine “as soon as we take office.” What would be the national boundaries of that bantustate? Those of 1967? Those of 2008 or of 2018? The two-state solution was always a temporizing maneuver by Israel & its allies to blunt opposition to outright colonialism. The Oslo Accords legitimized not a bantustate solution but the gradual expropriation & integration of all of Palestine into the state of Israel. By endorsing such a solution, Corbyn puts himself & the Labour Party squarely in the camp of so-called left Zionism which the Oslo Accords, the embargo of Gaza, & repeated carpet bombing sieges of Gaza have shown to be utterly duplicitous & politically bankrupt. Only a fool or a scoundrel believes a two-state solution is possible. Palestinian activists long ago proposed the only workable solution which is a democratic secular state where Palestinians & Jews lives as equals, even as brothers & sisters. Just because Corbyn is under fire by Zionists, we do not have to stand silent while he sells Palestinian self-determination down the drain.

Tied to his left Zionist views is his refusal to oppose Syrian & Russian bombing of civilians & all foreign military intervention in Syria on behalf of Assad. Instead, in concert with the corrupted antiwar movement, he only opposes US military intervention whereas principled antiwar activists oppose all military operations against unarmed civilians. He sees the counterrevolution against the Syrian Arab Spring uprising as a war of national sovereignty against US imperialism. Thus he is willing to ignore the monstrous human rights crimes of the Assad regime, he compromises with militarism & marches with fascists & Stalinists who use Islamophobia & anti-Semitism to justify support for Syrian & Russian bombing of civilians.

Oh what a tangled web we weave when we compromise with human, political, & democratic rights in Palestine & Syria. We stand with Corbyn against all false charges of anti-Semitism but we part ways with him when he makes unacceptable compromises with justice.

Photo is comparison map of disappearing Palestine. Could Corbyn define for the Labour membership which national boundary would comprise the new bantustate of Palestine?