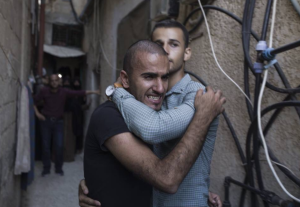 Palestinians grieving the loss of loved ones in the Great Return March massacre on Friday, September 28th: I post this photo because the local newspaper, the McAllen Monitor, recently published an article denouncing the death of a militant Zionist settler in the West Bank whilst ignoring the deaths & shootings of hundreds of unarmed Palestinian protesters, including this most recent massacre. The letter I wrote to the editor in response detailing the genocide against Palestinians was not published. This news blackout resonates with the coverage of a local television station  when a young reporter interviewed a Palestinian woman at a protest here on the slaughter in Gaza during the seven-week carpet bombing siege by Israel in 2014. The reporter allowed the activist to explain the Palestinian side of the story which was aired on the nightly news. I phoned the station later to thank them for honest reporting about the Palestinian struggle & was told that the reporter had seriously erred in her coverage & the station would be correcting it. That they did with frequent videos thereafter of Palestinians protesting the massacres but being presented as lawless youth–just as Black youth are portrayed in the US.

Our deepest condolences to Palestinians for the unbearable losses they are enduring. We need not stand helpless & distraught but can honor & build the economic & cultural boycott of Israel, educate others on the character of the genocide against Palestinians, & organize or attend protest rallies in defense of their struggle against colonialism, apartheid, occupation, genocide.