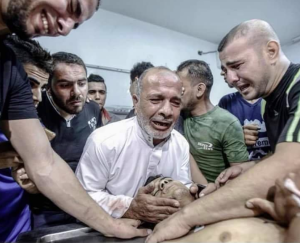 There are many heartbreaking photos from the Israeli massacre of unarmed Palestinian protesters at the Great Return March on Friday, September 28th. At least eight were killed, including three children, & 506 were injured, some of them critically & some who will be permanently disabled. This is just one of those photos; it is posted not to exploit the grief or invade the privacy of Palestinians but to show the utter moral depravity of Israel & the world governments & media which remain silent on the genocide.

Build the economic & cultural boycott of Israel to stand with Palestinians. Consider public rallies & protests in support of Palestinian self-determination.