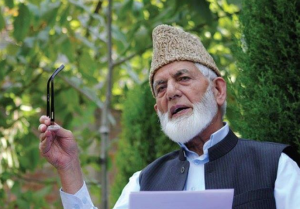 A powerful statement on Facebook by Kashmiri Zulkarnain Banday on the occasion of the 89th birthday of Syed Ali Shah Geelani, a leader of the freedom struggle in Kashmir:

In my childhood I was told by 3 members of my family, two of them staunch supporters of People’s Conference of that time, that ‘when we visited Syed Ali Geelani and Abdul Gani Lone in one of the Notorious Prisons in Jammu, we saw both of them tortured and Nude. All they had on were trunks.’

The effect of this story on me was such that I used to get dreams of two people in dungeons with no clothes on at all. However, as I grew up all these things (Torture, Killings et al) became normal.

One night when our house was raided at around 10:30 PM my cousin and two others were caught and tortured (3rd degree) till morning. Children and women were locked in one room but we could hear the cries of those tortured in other room. After that night kids used to call that room as ‘interrogation koéth’ (interrogation room) for some time.

In another incident when my maternal uncle’s house was raided; He, along with his two sons, was tortured till morning. Back then he was a tailor and was accused of stitching a Payjama for some local rebel.

In another room where women and kids were locked up, his youngest daughter, 10, started crying, one Indian armed personnel of BSF shoved his gloves deep in her throat and for next week she was continuously bleeding from her mouth.

Torture, killings, blinding, maiming are normal under Indian occupation but Occupation is and never will be normal. Resistance shall continue and continue till the death of occupation.